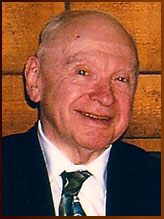 Raymond Bromell was raised in Kansas City, Missouri, received a degree in Petroleum Engineering at University of Oklahoma, later becoming president of one of the largest drilling companies in the world. His business took him to England, North Africa, and Latin America.

The history of dealing with other cultures in business has given him an appreciation of the work of Tell My People as they teach leaders to further the knowledge of Christ in the many different nations.

Retired from business, Ray and his wife Becky live in Dallas, Texas, where they give their time and attention to serving Tell My People.