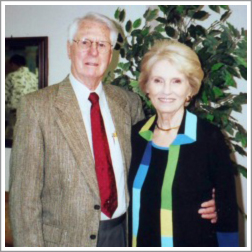 Helen Lynch was born in California where she spent her younger years, until her family moved to Texas. After beginning college, opportunities opened in Columbus, Ohio, and she worked as an advocate with a group of doctors and dieticians, reaching out to inner-city families. Later she became Director of Public Affairs for a CBS affiliate in Columbus.

After marriage to Dale Lynch they lived in Cary, Illinois where she developed a pre-school program which included preparing mentally-challenged children to be schooled with mainstream students. This played a key role in those children being accepted in public school programs in that region.

In 1972, on moving to Plano, Texas, Helen attended SMU in Dallas. She was majoring in Psychology Continuing Education when she accepted Christ in 1975 and a new life began. God called her into His service in 1976 and Tell My People, Inc. was founded by Helen and Dale Lynch in the same year.

She ministered to pastors and other leaders at conferences, seminars and similar events, taking the ministry of God’s word to many countries in Africa and Latin America.

From 1983 to 1985, Helen served on the board of directors of Mission Possible, a European mission organization working in the Soviet Bloc countries. During this experience, she saw firsthand the positive effect of nationals involved in missions from those countries.

“While ministering in a pastor’s conference in Tijuana Mexico, four young men came to me and said: …“we do not have time in our country or the money to attend 2 or 4 years of Bible school. Help us”…When I protested “Go to someone who speaks Spanish!” one man pointed to me and said: “NO, YOU!” This demand changed our entire ministry”
Helen teaches in TMP’s leadership programs and travelling extensively, sharing the powerful impact of God’s love and grace in the lives of His people.

Dale Lynch was raised in Highwood, Montana, graduating from Montana State University with a B.S. degree in Animal Science. He was selected as a member of “Who’s Who among Students in American Universities and Colleges.” During World War II he served as a gunnery instructor in the US Army.

He served in the National Association of Animal Breeders and was one of five recipients of the National Performance Registry International Award in recognition of outstanding service in the beef cattle improvement industry.
“Many people at some point in their lives find themselves on the leading edge of a new venture. Living the excitement of the times and working to get their ideas across brings out some of the best in people”… Dale Lynch’s contributions to the Simmental breed took him from coast to coast and across many nations when he introduced the first Simmental to the US. In 1968 he formed the American Simmental Association in the US, and holds the first membership of the American Simmental Association. Today the Simmental is the 4rd largest breed in the US. (The ASA Register Publication)

Dale became a Christian at 16 years of age, believing and living biblical principles throughout his lifetime. When his wife Helen received Christ in 1975 with a strong call to serve Him, he retired from the cattle business and joined her in forming Tell My People. Together they traveled many nations, and in 1988 he took an active part in developing the TMP Leadership Training International campus under Tell My People.

One of his favorite statements defining his belief in ministry is: “ All power is given unto Me in heaven and in earth, Go and make disciples of all nations…and I am with you always, even unto the end of the world”.

Dale added, “This still rings even sharper than ever…but most of all, with His victorious ascension to the right hand of God, His work is completed! But, our work is still being done.”